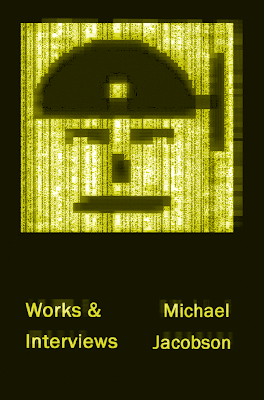 Jacobson’s Works & Interviews is quintessential ‘reading’ for anyone interested in asemic literature
July 24, 2018


The Giant’s Fence is an evolving asemic visual narrative, written in trans-symbolic script, that can be read aesthetically. Any meaning the reader constructs from the text is a correct translation; it is open to personal interpretation and exploration—Michael Jacobson

Jacobson’s Works & Interviews (1999-2017) is quintessential ‘reading’ for anyone interested in asemic literature. The book includes three asemic stories—the “Giant’s Fence” (my favorite), “Action Figures” (reminiscent of Kenneth Patchen’s picture poems), and “A Headhunter’s Tale” (asemic glyphs punctuated by facial expressions). The asemic stories are followed by interviews, which give insight into the philosophy of asemic literature. Following the interviews are several other asemic works: “THAT: A Planet,” “The Paranoia Machine,” and “MK JCBSN” (Michael Jacobson’s avatar).

“The Giant’s Fence” is a story composed of asemic glyphs i.e. “trans-symbolic script” or symbols that do not reflect anything. This is the raw aspect of language, language without meaning; residue of language after it has been fully deconstructed. The philosopher Ludwig Wittgenstein made two contributions to the philosophy of language, which should have ended the philosophy of language itself. First, Wittgenstein responded to the “picture theory” of language, which suggested that language’s function was to create a picture of the world. The philosophical task was to determine how to make the most accurate depiction of the world. This would amount to understanding how language pictures the world, but Wittgenstein argued that this cannot be done, because it would just be more language ad infinitum. This is where he cites his famous dictum at the end of Tractatus Logico-Philosophicus: 'That whereof we cannot speak, thereof we must remain silent.’

In his later theory on language, he dropped the idea that language was designed to picture the world—or at least that was not the only function of language. Instead, language was simply a tool that humans used to get things done and that all this philosophy of language was wasting its time. Later on, Jacques Derrida argued that meaning—in language—comes about through difference—a combination of difference and deference. Therefore, an absolutely true meaning of a term is impossible. Although he tells us that this is impossible, he does not get rid of the notion of meaning, he simply hides it in the metaphysical ether.

Asemic text, such as the “Giant’s Fence,” is the residue of language when it has been fully deconstructed and meaning is lost in the metaphysical ether. Its loss is not to be lamented, but instead it is to be celebrated and this is what asemic writers do—they celebrate the loss of meaning by mimicking language with aesthetic glyphs. This is what Jacobson means when he tells readers that the “Giant’s Fence” can be read aesthetically and that any interpretation is correct.

Reading Jacobson’s asemic text is an experience. As suggested one does not simply read asemic literature, instead one experiences it and there’s no better place to start than with the work of Michael Jacobson.

He is also very active in the asemic world, he runs a website that introduces the works of asemic artists throughout the world: The New Post-literate: A Gallery Of Asemic Writing.


Some thoughts by Rosaire Appel on "Works and Interviews"
Jacobson’s lucid articulations about asemic writing put you in the right mind-set for reading his, or anyone’s, asemic work. It is a different kind of reading, one that you invent on the spot –letting it evolve as you interact with the pages over time. Although very different, I think of Xu Bing’s “Book from the Ground”, which consists entirely of emojis. We know these symbols, but reading a book of them requires a focus that is different from, and more individualistic than, conventional word-symbol reading. Jacobson’s “The Giant’s Fence” and “Action Figures” both included in this volume, don’t use any conventional symbols. Instead, he creates conventions of his own. The reader decides how to move through these lines of configurations, at what speed, with what in mind. This kind of writing is a form of freedom – artistic and conceptual. Jacobson’s use of this freedom is so highly controlled and aware of itself that his language becomes readable. This turns reading into an act of freedom, when you let it.


This book offers reprints of three important asemic works by Jacobson: "The Giant's Fence," "Action Figures," and "A Headhunter's Tale." Each is a world onto itself, and is written using a style specific to the book. Most of the rest of the book is composed of interviews of Jacobson that concern the history, import, and "meaning" of asemic writing. Not only does this book offer some wonderful extended examples of asemic writing, but it helps ground the reader in the movement itself.

Posted by Michael Jacobson / MK JCBSN at 6:44 AM