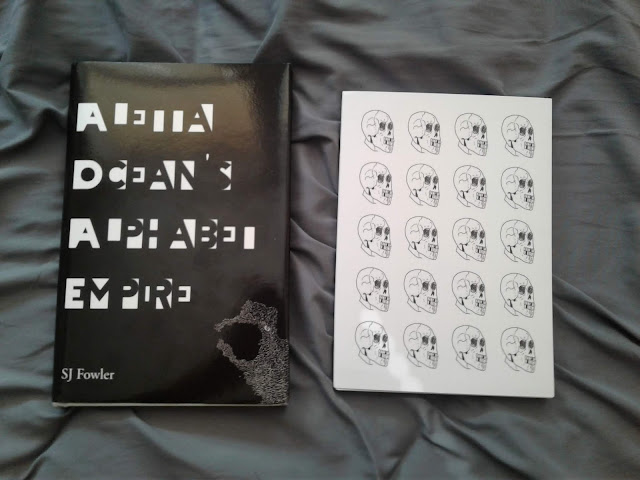 Aletta Ocean's Alphabet Empire is the more unreadable of the two. It contains mostly black and white asemic writing with the occasional "Picasso blue" page of asemic script. The art/writing has a storm like quality to it with asemic lightning bolts cutting across the surface of the folios. Other pages seem to contain illegible asemic animal tracks, and still others remind me of Morse code birch bark dashes. This book's main focus and general theme is the raw erotic power of creation of an excelled asemic mythology. AOAE is presented in a fine hardcover volume by Hesterglock Press and is limited to 40 copies.

I Fear My Best Work Behind Me is the slightly more legible of the two and is more colourful than Aletta. It has a spring-like playfulness and joy bringing qualities that makes me think of an asemic Kenneth Patchen crossed with finger painted art. There are a few more recognizable drolleries such as a deer's head and a crab, and the skulls on the cover art, but most of the text/art is nebulous. Fowler has acknowledged the influence of Christian Dotremont and Henri Michaux in this book, but from these predecessors he has developed his own original calligraphic style and signature. The publisher Stranger Press has taken Steven's work and made an admirable codex which I will treasure.

Both works offer an excellent introduction to Steven J. Fowler's personal raw art poetry. This is Poem Brut in its finest form, a term I believe coined by Steven to describe the outsider poetry not created with a computer. It is refreshing to read/hold these handwritten books since they offer a respite and rest from today's bloated techno-culture. Asemic books are the ultimate captcha and prove we are not robots. It is invigorating to read through these two works in a time when everything is being digitized, to have these two beautiful works of resistance now is essential. Find these books and you will know.