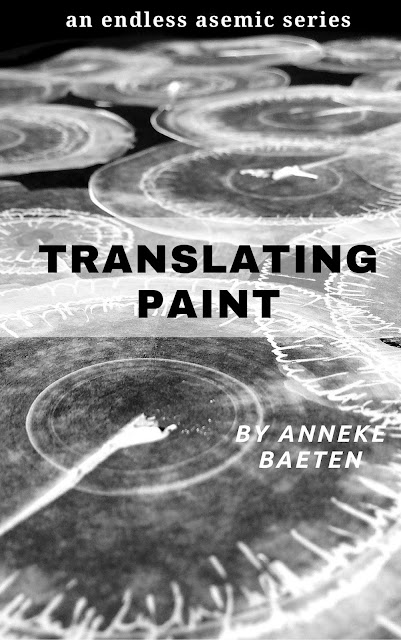 Unwritten markings rest on an unsaid surface. What to make of this asemic writing?

Newly scribed documents resist an old foe – the unpredictable. Whatever it takes to leave behind behind. Meaning ain’t nothing but a thing.

There is hybrid in the air. Applying another to another. A thing won’t last unless it attached to the next.

I wrote this once – I think asemic writing/poetry is the ratcheted up magnification of parts of letters, the parts that no longer resemble and cannot be traced back to the original and so have determined to make a go of it on their own. It will be interesting to see where all the threads arrive.

Hasn’t taken long for a result to materialize.

Anneke is doing. She is mixing facets and excavating. Future aboriginal thrusts into the void. To write ahead of legible thinking.

She grabs at paint and she photographs how asemic writings merge with it. The black and white has attitude, makes it pointed. There’s a seriousness in her work.

As each painted brush stroke is unique…

She says she’s “attempting a code for interpretation”

For each difference there is an adjoining asemic representation.

Creating an image using just these 24 brush strokes should produce an asemic translation. And conversely, a surface holding these 24 asemic stanzas, phrases and punctuations should be translatable visually.

This piece is from the ongoing series “Translating Paint”.
Anneke wields a sharp eye that steadies her composition. Her balance is sure. The series itself “Translating Paint”, shows her ability to keep a photographer’s sensitivities and a painterly hand alongside her visible language inclinations.

A key, genome, a periodic table showing how paint translates into writing and how writing is visual and gets traced into even further visuals and shifts into newly altered meaning.

This piece and its early building blocks, steers you to a future alphabet, near ready and able to propel you through thought and a capability to document experience.

She further explains, “it’s all about interpreting the paint, and finishing their sentences, showing their potential, their unspoken power or their assumed softness and how, when they speak, they can surprise as sometimes they could be speaking the opposite”.”

This piece is the first fold of a dictionary waiting to bloom.
Posted by Michael Jacobson / MK JCBSN at 10:08 AM